Named for the confluence of the Potomac and Shenandoah rivers, the Two Rivers Giving Circle is one of the few funders in the Eastern Panhandle of West Virginia that provides small grants to support natural resource conservation and historic preservation programs and projects. Each member of the Giving Circle makes a tax-deductible donation of $500 or more to the Community Foundation annually. During the past eleven years, grants totaling more than $100,000 have been awarded by the Two Rivers Giving Circle Fund to a wide variety of nonprofit organizations, schools, and government agencies that are supporting these causes in our community. Applications for a Two Rivers Giving Circle Grant may be submitted between June 1 and September 16, and grants are awarded in November. 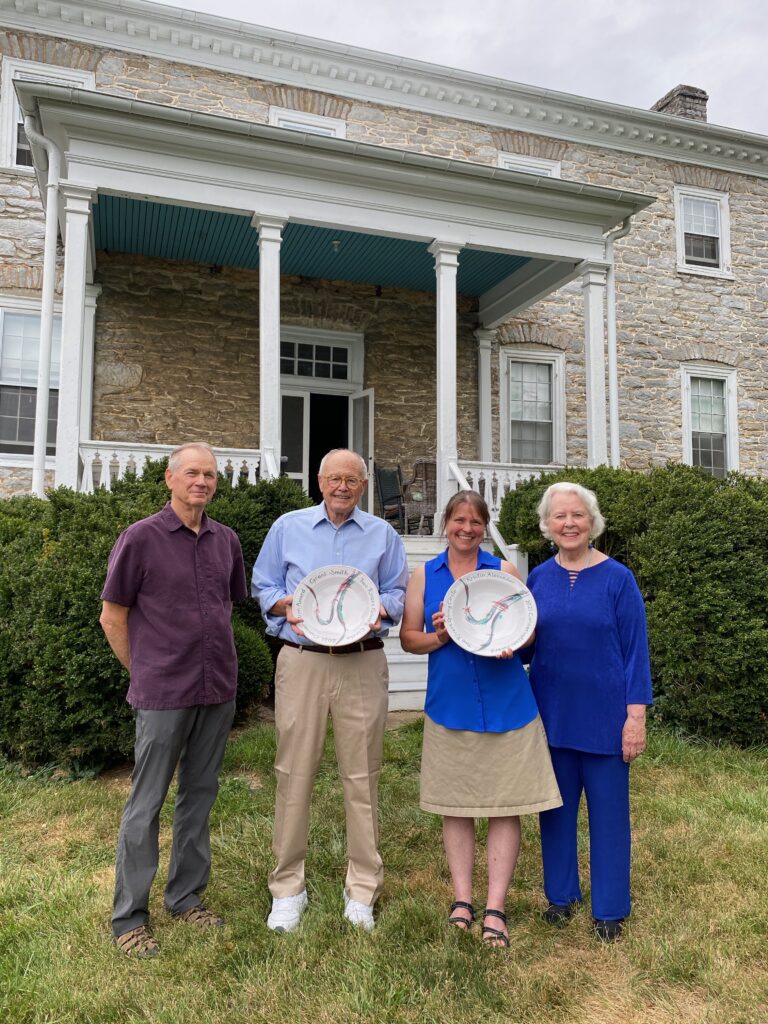 The awards were presented during the Giving Circle’s annual summer picnic, held at Charles Town’s historic Harewood mansion on August 15. They recognize both individuals for their many years of strong support for natural resources conservation in the Eastern Panhandle. Both of them received handcrafted platters made from local clay by award-winning potters Pam and Ren Parziale, of Sycamore Pottery in Leetown.

The Two Rivers Giving Circle is a field of interest fund of the Eastern West Virginia Community Foundation. Since its inception in 2008, it has provided more than $100,000 to Eastern Panhandle organizations engaged in natural resources conservation and historic preservation. It is one of the few grantmakers in the region that focuses on these two fields.

Alexander is the Executive Director of the Potomac Valley Audubon Society, a post she has held since 2007. She first joined PVAS in 2001, as director of its first nature preserve, the Yankauer Preserve in Berkeley County. In that role, she was the organization’s only employee. She now oversees an organization that includes five staff members, operates four nature preserves, and offers a wide variety of programs and activities aimed at promoting greater understanding and appreciation of the natural world. A native of Maryland, Alexander moved to the Eastern Panhandle in 2000. She lives in rural Martinsburg with her husband Jeff and son, JJ.

Smith has been the President of the Land Trust of the Eastern Panhandle for the past two decades. The Land Trust was established in 1994 to preserve open space, farmland, and rural landscapes in the three-county region, and it entered into its first conservation easement in 1997. Under Smith’s leadership, this still-all-volunteer organization has grown to the point where it now holds or co-holds 50 conservation easements that are protecting more than 4,800 acres. Smith and his wife, Renny, first moved to the area in 1988, after he retired from a long, distinguished career with the U.S. Department of State. They currently live in Shepherdstown.

Beginning June 1, the Two Rivers Giving Circle will be accepting applications for its 2022 grants, which will be awarded this fall. The deadline for submitting grant applications is September 16.

The Giving Circle brings together committed, concerned and charitably-minded citizens to focus on local conservation and preservation grantmaking in Jefferson, Berkeley, and Morgan counties. By pooling their resources, members of the Giving Circle are able to have a much greater impact on the causes that matter to them. Nonprofit organizations and local schools submit grant applications to the Community Foundation throughout the summer. Members of the Giving Circle meet twice in the early fall to review applications, discuss the proposed projects, research the applicant agencies, and recommend grants.

Membership is open to anyone interested in supporting natural resource conservation and historic preservation efforts, educating residents about the importance of nature, energy conservation, and much more.

The Two Rivers Giving Circle is a charitable organization that fills a critical need. We’re one of the few local sources of grants for Eastern Panhandle nonprofit groups that are engaged in historic preservation and natural resources conservation.

Our members come from Jefferson, Berkeley, and Morgan counties, and we confine our grantmaking to those counties. We seek to assist groups that:

Safeguard Habitats by conserving land, watersheds, and other natural resources

The funds for our grants come from the annual contributions of Giving Circle members and donations from friends, which are all pooled together.

Those who choose to become members don’t just contribute: they also take a hands-on approach to the Circle’s grantmaking, helping to solicit and review grant proposals and to decide which proposals will be funded. This is a great way to become more involved in the community and to learn more about the process of philanthropy.

Whether you choose to be a member or a donor, participation in the Two Rivers Giving Circle is a meaningful and rewarding way to give back to our community. We hope you will consider joining or donating so we can expand the Circle’s efforts and all do more together.

APPLY FOR A GRANT each summer by September 16th. Nonprofit organizations, government agencies, and schools that are interested in applying for a grant can download the Two Rivers Giving Circle Grant Application beginning in early summer.

The Two Rivers Giving Circle has awarded more than $100,000 in grants to local nonprofit organizations since its inception in 2008. To support the grantmaking, members of the giving circle each contribute at least $500 annually. Twenty percent of the annual gift is dedicated to building an endowment at the Eastern West Virginia Community Foundation. During the past ten years, the Two Rivers Giving Circle Fund has grown to just over $60,000. A list of grants that have been funded follows:

$  2,465.86 – Berkeley County Roundhouse Foundation, to replace broken and missing windowpanes in the historic Martinsburg Roundhouse. The structure, which is considered the finest and most complete example of a mid-19th Century railroad shop complex in the US, is a National Historic Landmark.

$  2,000.00 – General Adam Stephen Memorial Association, Inc., to provide new interpretive signage for Martinsburg’s Triple Brick Museum. The museum is adjacent to the historic Adam Stephen House and displays objects that reflect the settlement and early history of the town.

$  2,500.00 – Halltown Historic Landmark Preservation Association, to fund a historical assessment and comprehensive plan for restoration of the Halltown Memorial Chapel and adjacent school building. The Chapel was built in 1901 by local African-American artisans and served the Jefferson County African-American community for more than 60 years. It was entered in the National Register of Historic Places in 1984

$  1,090.00 – Old Opera House, to repair and restore the balcony staircase railing in the Old Opera House building. The building, which is in active use as a community theater and arts center, was constructed in 1911 and is also on the National Register of Historic Places. The balcony railing is one of the building’s few original design elements that still exist.

$2,100 – Shepherd University, to help fund a series of Earth Day workshops for students in grades 4 through 12.

$1,400 – American Conservation Film Festival, to support the expansion of the Festival’s Next Gen Capture Conservation Video Contest, which engages children ages 18 and under in creating videos about conservation and what nature means to them.

$1,315 – Jefferson County Historic Landmarks Commission, for the restoration of an exterior door in the old Baltimore and Ohio Railroad Depot at Duffields. Built in 1839, the Depot is the second-oldest surviving combined freight and passenger rail depot in the U.S.

$1,100 – Friends of Webb-Blessing House, to assist with the repair of two rooms in this historic Charles Town structure, which was built by a free Black family in the 1830s.

$1,035 – Jefferson County Museum, to cover the cost of displaying, digitizing, and reproducing three important issues of a Boston-based abolitionist newspaper that the museum has acquired. The issues cover John Brown’s raid on Harpers Ferry and his subsequent trial and execution, and they offer a very different perspective on these events than local publications.

$1,000 – Friends of Happy Retreat, to support the restoration of an important room in Charles Town’s historic Happy Retreat mansion so the room can be used as the “Showroom” for heritage tourism, education, cultural and artistic activities, and community events.

$2,500 to the Charles Town’s Claymont Society for Continuous Education, to help pay for the restoration of a veranda roof on Claymont Court, the historic Jefferson County Washington family home the Society owns and maintains.

$1,250 to the Cacapon and Lost Rivers Land Trust, to help cover the cost of securing conservation easements to protect four parcels of land along the Cacapon River in the Connors Hollow area of Morgan County

$1,250 to the Eastern Panhandle Planning and Development Council, to help promote federal conservation grants to property owners in the Panhandle’s three counties.

$1,200 to the Rolling Ridge Conservancy, to help restore a trail in its 1,400-acre forest adjacent to the Appalachian Trail along the Blue Ridge in southern Jefferson County.

$1,200 to the Potomac Valley Audubon Society, to help cover the cost of a boardwalk in its Cool Spring Nature Preserve in Jefferson County.

$1,000 to the Museum of Berkeley Springs, to help with the cost of a special exhibit being planned for the town’s bicentennial.

$1,000 to the Historic Shepherdstown Commission, to help with brickwork repair at Shepherdstown’s historic Entler Hotel building.

$1,500 to the Town of Bath for greenspace infrastructure and improvements to help minimize flooding in downtown Berkeley Springs.

$1,500 to the Rolling Ridge Foundation for a riparian restoration of the area around a waterfall on the property located east of the Shenandoah River and adjacent to the Appalachian Trail

$2,500 to Jefferson County Museum to stabilize, conserve, and display the flag of the Green-Copeland American Legion Post 63, an African American organization formed in Charles Town in 1929 by Edward Tolbert and other Jefferson County World War I veterans.

$2,500 – Berkeley County Historical Society for an archive computer, supplies, and other equipment.

$2,000 – Historic Shepherdstown Commission for continued repairs to the stone walls at the Shepherd Family Graveyard.

$1,000 – North American Bushcraft School to help toward the construction of an Outdoor Classroom

$1,000 — Shepherd University for the restoration of windows (and workshop) in historic property on campus

$1,000 — Martinsburg Library to support “This Land is Your Land”, an environmental awareness program for children.

$1,694.85 — Shepherd University and its Historic Preservation Program to sponsor hand-on experiential learning for students in the restoration of area historic graves and graveyards.

$2,000 — Shepherd University in partnership with Shepherdstown Elementary School to develop a two-day scavenger hunt for fifth-graders. The program integrates photography with local architecture, natural sites, and historic places in the Shepherdstown area.

$993.95 — Warm Springs Watershed Association based in Berkeley Springs to design, print, and distribute a new informational brochure about local watershed importance and protection.

$500 — Friends Wilderness Center to offset costs for materials for repair and renovation of a treehouse retreat center.

$2,021.97 — Elks Run Study Committee to help build outreach and communication to local citizens regarding the importance of Elks Run Stream and its watershed.

$2,175 — Morgan County Solid Waste Authority to assist with the purchase of equipment to open and operate a permanent recycling center to serve Morgan County.