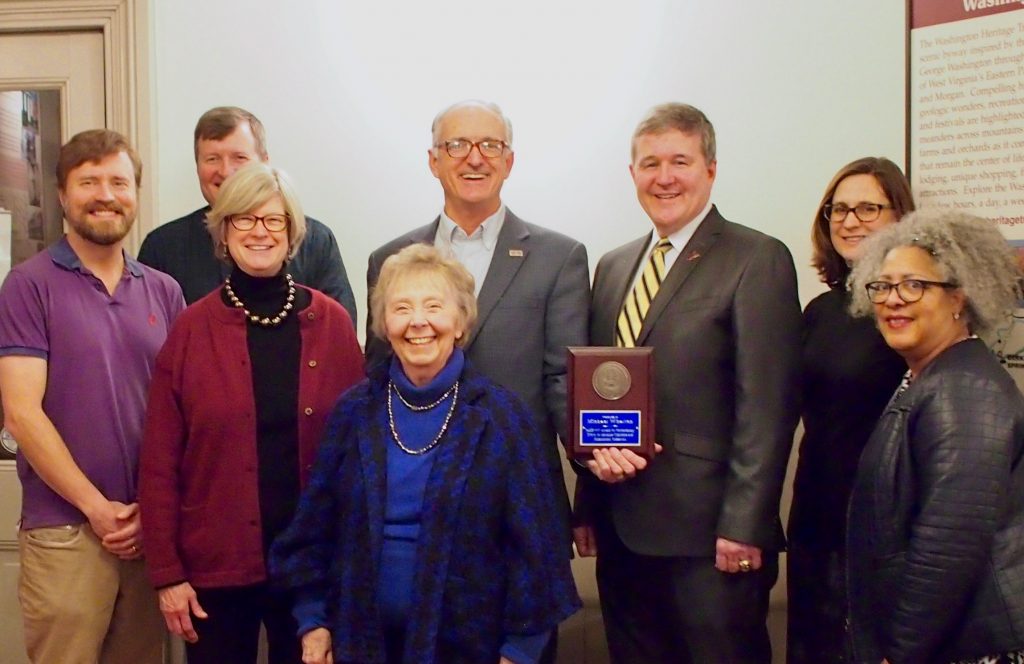 Herald-Mail reporter Jenni Vincent wrote this funny and wonderful article about a surprise award that was presented by the National Association of Secretaries of State.

MARTINSBURG, W.Va. — Michael Whalton got the surprise of his professional life Monday morning.

That is when West Virginia Secretary of State Mac Warner presented him with the National Association of Secretaries of State Award for Extraordinary Effort to Advance Charitable and Philanthropic Endeavors.

The honor came as a result of Whalton’s work with the Eastern West Virginia Community Foundation, which includes being a board member for 10 years before becoming executive director in 2012.

Whalton also worked part-time as executive director of the Community Foundation of the Northern Shenandoah Valley from 2005-11.

“It is a national and really very prestigious award because there aren’t that many given out, but Michael is very deserving of this honor,” Warner said, noting that a local resident asked that Whalton be nominated for the award.

The process got underway last fall and only recently was finalized, Warner said.

Foundation board members, friends, and local government officials huddled in a conference room at the secretary of state’s local office awaiting the guest of honor.

Whalton was held up delivering a ceremonial check to a local nonprofit organization and didn’t arrive exactly when he was expected.

His wife, Susan, laughed as she anxiously watched the door.

“I have told so many lies just to make sure this would still be a secret. I even made up the wildest stories just to get here this morning,” she said with a laugh. “I think my nose is still growing.

“Other people were also creeping around outside here this morning trying to keep the secret. It has just been hilarious.”

Warner smiled as he watched the group, noting that he wasn’t sure if it was possible to pull off the surprise event.

“We’ve done our best to make this happen, so I guess we will see,” he said.

Minutes later, Whalton stuck his head in the room, but quickly stepped back after those gathered yelled “surprise!”

“Well, folks, it looks like we pulled this off,” Warner said as Whalton stood by his side, still shaking his head.

“I am so glad because when I heard about all the things you’ve been involved in, I thought of a saying from my Methodist upbringing — a heart strangely warmed,” he said. “It refers to someone who lives passionately for others, and I think that’s what you represent.”

Whalton said it was a “total surprise” and an experience he won’t forget.

“At first, I was just going to stand outside the door because it looked like there was something really interesting going on in here. And it turned out there was,” he said as audience members laughed along with him.