SHEPHERDSTOWN — Henry Willard was a well-known community member, a husband, and father and a much-loved benefactor to many causes in the community. And with his passing two days before Christmas in 2018, that philanthropy would continue.

“For many years, my father donated most of his annual income to causes that he cared about — many of which were local nonprofits that we should all support,” said Hank Willard, Henry’s son. “He loved this community, and I know my parents enjoyed the best years of their lives in Shepherdstown. I believe my father was inspired by the high level of sharing and commitment to mutual aid that he witnessed here.” 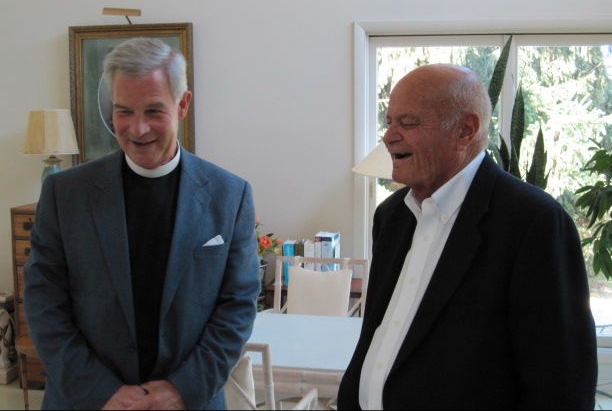 The Rev. GT Schramm (left in the photo above), the rector of Shepherdstown’s Trinity Episcopal Church, said the Willards were the first people he and his wife met when they came to Shepherdstown 37 years ago.

“Over the years, (Henry) served Trinity as warden and trustee. His wife, Louise, also served in a variety of capacities,” Schramm said. “Henry and Louise cared about this community very deeply and it showed, both in the way they lived and in what they left to so many organizations after they were gone.”

Trinity received a legacy gift of $500,000 from the Willard estate. Schramm visited Willard many times throughout his final illness at his home on River Road.

“I quickly came to trust and rely on his support and counsel,” Schramm said. “He was a great friend of mine, Trinity Church, and our area. I know he was delighted to leave such a legacy for us all. I remember the smile on his face when we met in front of the post office and he had told me about his will.”

A veteran of World War II, Henry served aboard the aircraft carrier U.S.S. Franklin as a young seaman and survived one of the deadliest attacks on a U.S. warship during the war.

A fourth-generation Washingtonian and great-grandson of Henry A. Willard, the founder of the city’s storied Willard Hotel, he retired to Shepherdstown in 1979, after a long career as an executive with American Security and Trust Co. (now Bank of America) and service on the board of numerous cultural and civic organizations. In 1971, he was appointed by President Richard Nixon to the District of Columbia City Council at a time when the city was transitioning to home rule and served on the board of the Washington Metropolitan Area Transit Authority as the early phases of the city’s new Metro system were being planned and constructed. He had a lifelong passion for U.S. railroad history and had a keen interest and knowledge of American history, particularly the Civil War.

“It was always interesting talking to Henry,” Schramm said. “He knew a lot about politics, history, and business. He wasn’t bashful about sharing his opinion.”

It wasn’t uncommon to see Henry on his way to the iconic post office – where, he, like many other Shepherdstown residents, would meet and greet his friends. He and Louise also loved eating in local restaurants, usually having a table of honor where they would often be greeted by friends. 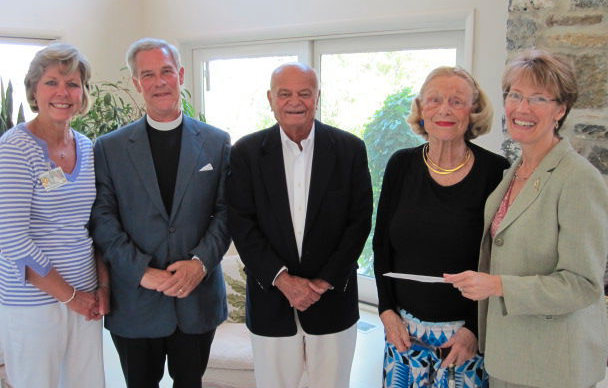 For several years in the 1990s, Louise Willard sat on the board of directors for Hospice of the Panhandle. It was service neither she nor Henry ever forgot.

“I still remember visiting with the Willards during our capital campaign,” Hospice CEO Margaret Cogswell said. “Louise was thrilled to see the drawings for our new inpatient facility. The Willards have provided such incredible support to our organization over the years. They were truly remarkable philanthropists – people who were visionary. We will use their money wisely to expand the mission of the organization and meet the community’s needs.”

During the agency’s campaign, the Willards presented a $200,000 check to Cogswell(right in the photo above) to support the effort. In the photo, the Willards are accompanied by G.T. Schramm and Maria Lorensen. Hospice of the Panhandle also received a $500,000 legacy gift.

“For more than a decade, Henry Willard quietly supported the Eastern West Virginia Community Foundation by making frequent donations to our unrestricted endowment,” EWVCF Executive Director Michael Whalton said. “We knew he was equally generous to several other nonprofit organizations in the region but never imagined that he’d leave such a remarkable legacy.” Whalton added, “Receiving this contribution during the coronavirus pandemic will help us address the needs of so many other essential Eastern Panhandle nonprofit organizations and for that, we are truly grateful.”

The Willards also were huge supporters of the arts. CATF’s legacy gift was $250,000.

“On behalf of all the playwrights, theater artists, and our beloved community, I want to personally acknowledge the overwhelming generosity of our dear friend Henry K. Willard II and his dedicated support for the Contemporary American Theater Festival. Henry and Louise Willard believed in the economic impact, the educational, cultural, and spiritual power of the arts,” CATF Founding Director Ed Herendeen. “Our lives are better today because of their extraordinary generosity and their love for our community. I am forever grateful for their friendship.”

The Historic Elwood Cemetery also received a $250,000 bequest, as did Panhandle Home Health.

“The officers and members of the Elmwood Cemetery Board greatly appreciate the generous donation made to our organization by Mr. Willard,” said Board President Sam Billmyer. ”It is through gifts like his that allow the Elmwood Board to continue the work of maintaining and preserving the cemetery grounds.”

“We are grateful for Mr. Willard’s generosity, his trust, and most importantly, his commitment to Panhandle Home Health’s mission,” Bivens added.

Shepherdstown Public Library Board President Terrence Kramer said the Willard family stands out for its longstanding and sustained engagement, as well as its interest in stewardship, which has helped shape the library’s commitment to service in the community. The library’s legacy gift was for $100,000.

“We were humbled and grateful to receive the Willard bequest to the library,” Kramer said. “This generous bequest is not just for the library, it is for everyone who reads, dreams, and imagines. Those who are always in search of something more. We will do incredible things with it.”

Also receiving a generous $100,000 bequest was the United Way of the Eastern Panhandle.

“The root of the word philanthropy means a love of mankind,” United Way Director Penny Porter. “What an incredible legacy Mr. Willard leaves in our community as a philanthropist, sharing his love of mankind with such generosity. We are honored to use his gift to United Way to improve our community. His gift will allow us to have an impact on thousands of lives – to make a difference for so many men, women, and children who call the Eastern Panhandle home.”

Donna Bertazonni, president of the Historic Shepherdstown Commission, said the commission will use its $50,000 bequest to “fulfill our mission of telling the story of Shepherdstown by giving us the opportunity to add artifacts to the collection of our museum. It will also help us maintain the historic Entler building complex, which houses the museum, offices, and the Rumsey boathouse.”

“We are sincerely grateful to Mr. Willard and his heartfelt gifts throughout his life to Good Shepherd Caregivers and all of the community. His generosity lives on, enabling us to rise above economic hardship and unforeseen times. Mr. Willard is the purest example of ‘Neighbors Helping Neighbors,’” said Paula Marrone-Reese, executive director of the caregivers’ organization, which received $100,000 from the Willard estate.

The board of directors of the Animal Welfare Society of Jefferson County also expressed gratitude for Willard’s $50,000 estate gift.

“He loved animals and had a caring understanding of the needs of homeless and neglected dogs and cats,” said Ann Trumble, president of the AWS. “We are moved by his compassion for not only us but for so many of the local nonprofits that make our community such a wonderful place to live.”