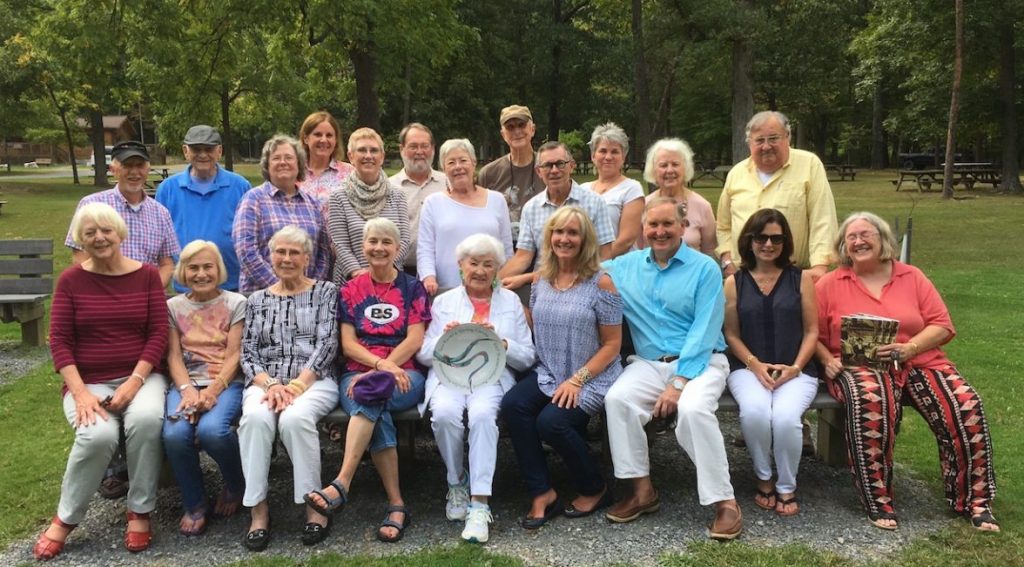 The Two Rivers Giving Circle has honored Betty Lou Harmison, of Berkeley Springs, with its 2017 Preservation and Conservation Award.

The award recognizes Harmison for her many years of support for historic preservation and natural resources conservation in Morgan County. It was presented during the organization’s annual picnic, held September 16 at Cacapon State Park. Harmison received a handcrafted platter made from local clay by award-winning potters Pam and Ren Parziale of Sycamore Pottery in Leetown.

The Two Rivers Giving Circle is an advised fund of the Eastern West Virginia Community Foundation. Since its inception in 2008, it has provided grants totaling more than $68,000 to Eastern Panhandle organizations engaged in historic preservation and natural resources conservation. It is one of the few grantmakers in the region that focuses on these two fields.

Each year, the Giving Circle also recognizes an individual who has been a leader in one or both of these fields.

A long-time resident of Berkeley Springs, Harmison for many years operated the Park View Inn (now the Country Inn) with her late husband Bill. Over the years she has been an energetic member of many different community organizations.

In the field of historic preservation, she has been active in the Morgan County Historical Society and Ye Olde Town of Bath Daughters of the American Revolution. She is one of the founders and a longtime leader of the Museum of the Berkeley Springs, and a longtime member of the Town of Bath Landmarks Commission.

During the nation’s Bicentennial in 1976, she headed the town’s bicentennial committee, developing historical markers and a walking tour of the town’s original lots, and hosting officials from Bath, England.

In 2011, she was the co-author, with Jeanne Mozier, of the Arcadia Publishing Company’s “Images of America” volume on Berkeley Springs.

At the state level, she has served on the Records Management and Preservation Board of the West Virginia Division of Culture and History.

Harmison has also had a strong interest in natural resources conservation. She is one of the founders and a longtime member of the Foxglove Garden Club in Berkeley Springs, which has long helped to beautify the town, and has also served on the town’s streetscape committee. A decade ago, she assisted the Potomac Valley Audubon Society in establishing the Eidolon Nature Preserve in Morgan County.

She was named a West Virginia History Hero in 2007 and received a Girl Scouts Women of Distinction Award in 2010.

Individuals interested in joining the Two Rivers Giving Circle should contact Michael Whalton, executive director of the Eastern West Virginia Community Foundation, at 304-264-0353 or info@ewvcf.org. The cost of membership is $500 annually.