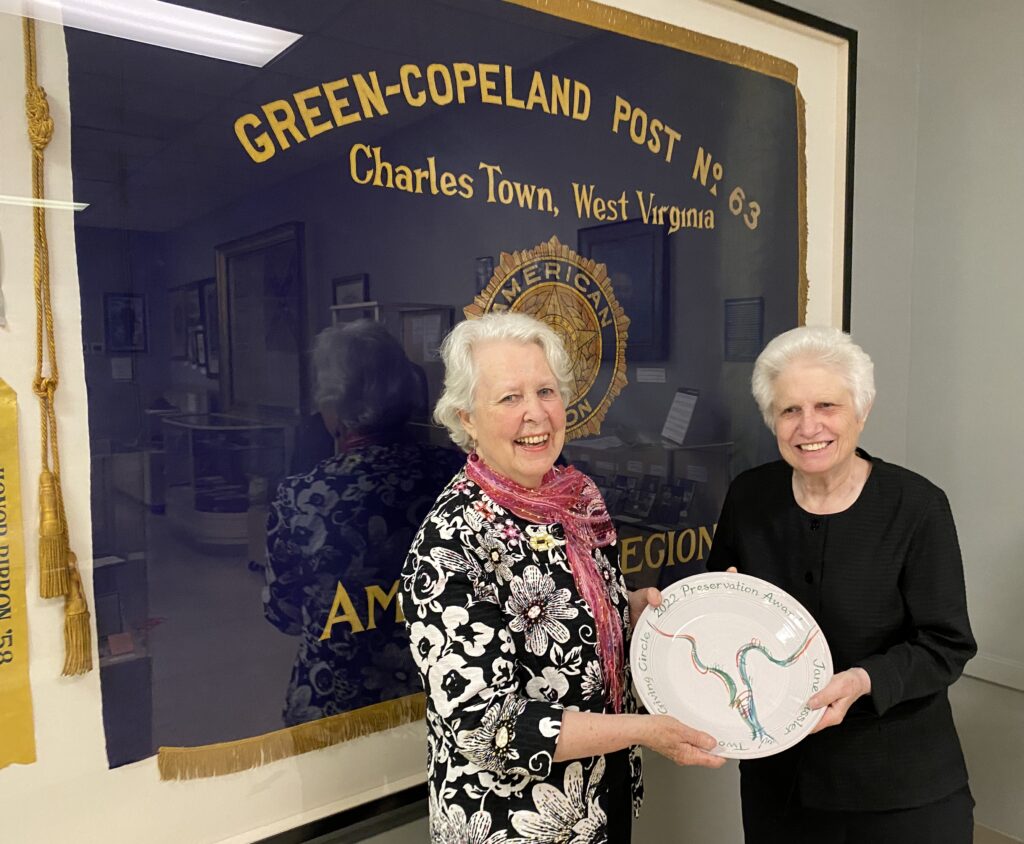 The Two Rivers Giving Circle has honored Jane Rissler, the director of the Jefferson County Museum, with its 2022 Preservation Award.

The award was presented at a ceremony and reception held on the afternoon of Sunday, May 15, at the museum in Charles Town. It is a personalized, handcrafted platter made from local clay by award-winning potters Pam and Ren Parziale, of Sycamore Pottery in Leetown.

The accompanying photo shows Giving Circle member Linda Case, left, presenting the award to Ms. Rissler. They are standing in front of a historic flag that was conserved for the museum’s collection with help from a Two Rivers Giving Circle grant. The flag is from Charles Town’s Green-Copeland American Legion Post 63, founded in 1929 by local African Americans who had served in World War I.

The Two Rivers Giving Circle is a field of interest fund of the Eastern West Virginia Community Foundation. Since its inception in 2008, it has provided more than $110,000 to Eastern Panhandle organizations engaged in natural resources conservation and historic preservation. It is one of the few grant makers in the region that focuses on these two fields.

A Jefferson County native, Ms. Rissler received a bachelor’s degree from Shepherd College, a master’s from West Virginia University, and a Ph.D. in plant pathology from Cornell University. Her ensuing career as a scientist spanned three-and-a-half decades and included positions with the University of Maryland, the US Environmental Protection Agency, the National Wildlife Federation, and the Union of Concerned Scientists.

In 2005, while she was still working and commuting from Jefferson County to Washington, DC, she began volunteering at the county museum. When she retired in 2011, she was hired as the museum’s director.

In her presenting remarks, Ms. Case said Ms. Rissler has greatly modernized the museum’s operations during her tenure as director, leading major upgrades in its computing capabilities and online presence. She has also modernized and strengthened its finances, establishing a special new fund dedicated to acquisitions and conservation, and successfully seeking grant funding to help support these purposes.

“In addition,” Ms. Case said, “she has worked to build bridges to all sectors of the community. She has recounted that in 2016, the museum was preparing for an exhibit and realized it was not representing African Americans and women’s contributions to the county. Since then, she has made a strong push to diversify the museum’s collection and provide exhibits that recognize the contributions of all.”

To learn more about the Giving Circle, and to get information about joining or contributing, go to the Eastern West Virginia Community Foundation website at www.ewvcf.org. Or contact Michael Whalton, the Foundation’s executive director, at 304-264-0353 or info@ewvcf.org. The cost of membership in the Giving Circle is $500 annually. However, contributions of any amount are welcomed.